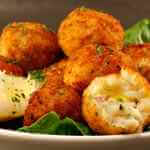 We celebrated my two world records last weekend in the best way I know how. By having some friends around to eat (some of) the fish I brought home from Ascension Island. I cooked the fish in various ways, but my fish balls were so delicious, I have decided to share my recipe on the blog. Before I begin, perhaps I should explain that (i) I made this recipe up by combining a few ideas, and (ii) I am not big on specifying quantities….so make it your own, or make it at your own risk! Also, I have no idea how many I made… but don’t worry because they will be eaten.

Approximately 1kg of fish, defrosted and cut into chunks. (This could be any firm-fleshed fish – it doesn’t need to be a world record specimen either!) Remove the skin and squeeze out all excess water, then dry thoroughly with kitchen roll. Pop fish into food processor and whizz for a few seconds until finely chopped.

Chop and add to the fish mixture:

Then spoon in about two or three heaped dessert spoons of coconut cream – don’t use the milk, or even worse, the light coconut milk (too runny!).

Last, add these spices to the mixture:

Using the pulse setting on your food processor, whizz up the mixture in short bursts until everything is combined. Don’t over process, otherwise it will lose its texture.

Spread a bit of greaseproof paper onto a tray and shape the mixture into small balls (for starters) or larger balls if you’re making a main course. Put the tray into the fridge for at least an hour to chill through.

Now comes the messy bit – but I promise you it is worth it! Dump a bit of plain flour into a shallow bowl. In a second bowl, beat up a couple of eggs. In a third bowl, put some fresh breadcrumbs (I whizzed up a few slices of stale wholemeal bread in my trusty processor).

Heat enough oil in your favourite pan to shallow fry the fish balls (I used sunflower oil). Roll each ball in the flour first, then the egg and finally the bread crumbs. Put each ball carefully into the pan and fry on each side for a few minutes. You will need to open up the first few balls to get the timing right – you don’t want to overcook the fish as it will be too dry. Cook until the outside is golden brown and crispy and the inside is just cooked.

Serve immediately with a dip made of Hellmann’s mayonnaise and Thai sweet chilli sauce (about half/half) and about a teaspoon of English mustard mixed together. Scrumptious. Great for eating cold the next day too – ideal for lunch boxes! Enjoy.