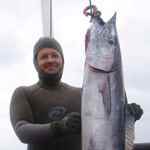 Definitely one of the top 5 big game, the wahoo is an inhabitant of warm, clear water. Crafty and intelligent gamefish with huge power and razor sharp teeth, wahoo are a challenging fish to catch. Wahoo grow to in excess of 120 pounds but most specimens are under 70. It is hard to think of a more ‘tactical’ fish than a wahoo, and capturing them requires timing, accuracy and dedication.

When to hunt Wahoo:

Where to catch Wahoo:

In warm, clear tropical waters deeper than 50m (though occasionally shallower). Wahoo love deep dropoffs and tend to hang up current of structures. These fish are at home in the wild blue open ocean and will be found far from land or cover of any kind.

Behaviour and catching a Wahoo:

Wahoo can be tricky fish to catch as they do not live around cover and have good eyesight. Key to catching them is using their curious nature against them. Wahoo are almost always found in deep blue water. For the best chance of encountering one, drift along a deep dropoff or underwater pinacle (which will be way out of sight but seen on the sounder). Other places to drift include near anchored ships as these often attract a huge aggregation of baitfish, sheltering around the hull.

Sometimes wahoo will be encountered when drifting with the boat using a drogue sea anchor and chumming for tuna. For this style of drifting you should set your flasher at a depth of 4-6m tied to the drogue line about 10m from the boat. You can then hang onto the line and keep watch down current and to the sides, for wahoo attracted either by the chum or the flasher.

When drifting without the boat, the line between the chickenfloat and the flasher should be set at 6-8m. Swim or drift in a given direction, aiming to cross contour changes far below. Continuously scan for approaching wahoo through 360′. Wahoo will often approach from behind you or from the sides. If you keep looking down at your flasher or dead ahead, you will miss the majority of approaches and only see them when they have already approached the flasher and are moving away.

On spotting an approaching wahoo, make no indication that you have seen it. Some divers disguise their eyes with their hand. Allow the wahoo to approach the flasher and take a steady dive, with smooth movements. The fish will tolerate an approach from directly above, and this is your best chance if you have timed it right.

Should you not be able to dive directly from above, a much more difficult pursuit can be attempted. Wahoo can be approached with blind side attack, which is explained in the dive report in the Yellowfin Tuna section. They will often be attracted when your buddy has shot a fish. Wahoo will also suddenly appear when the boat comes to pick you up, attracted by the wake. Hence do not unload your gun until the last moment when bluewater hunting for wahoo.

On being shot, wahoo will make a high speed run, and a 60 pound wahoo is capable of downing an 11l and 35 l float for a time.

Wahoo chicken floatsChicken floats and flashers- vital to maximise your chances
After the explosive run, the fish tires quickly and can be pulled up gently without further acrobatics, quite the opposite of tuna. The first run is incredibly powerful however so you need to be sure of a good shot. A bungee connected to the floatline is a must, to reduce the initial shock on the fish.

Beware the teeth when boating and handling the fish, they are razor sharp, though the fish do not seem to deliberately bite a diver.

‘Looking directly behind me I saw a wahoo sneaking up on the flasher. I gave no hint that I had seen the fish, but removed my snorkel and prepared to dive, as soon as the wahoo approached the flasher below me.

As soon as his beak came into view I silently dived for a perfect vertical intercept, and fired the 140 Tuna Railgun as the fish passed below me.

Wahoo is not as good as sashimi. However, when cooked you cant go wrong.

<< Back to species hunting guides