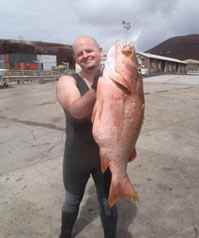 I spent a week this March diving for Pelagics off Ascension Island in the South Atlantic with Colin Chester and Tony Eynon. We had a very successful trip, with me and Tony each landing 3 sailfish over 100 pounds. Knowing that big Dog snappers live on some of the ledges we took a day off bluewater fishing to look for them. Dog snappers (Lutjanus jocu ) are the only snappers found on Ascension. I have shot some big ones in the past so we knew a potential World Record was on the cards. Colin was present when the current Dog snapper WR was caught there a couple of years ago.

Water conditions were excellent with a moderate chop, and visibility to 50m +. Temp was 28C in the water with air temp at 35C. We anchored our small rib on a rocky shelf in about 10m of water. This was about 500m from shore on the western part of the Island. Looking towards shore there was a moderate current from left to right, and this was making the fish active and enthusiastic as they darted about looking for food. Tony set off to look for snappers over a wreck, and Colin was looking for crays.

From previous dives there I knew there was a dropoff to about 30m from 18m at the edge of the reef. Here I had seen snappers patrolling in the past. I had only two guns for the trip, a 110cm Rob Allen carbon for groupers and jacks and the big 160cm Rob Allen Carbon railgun with double 16mm rubbers. It was very clear and my personal preference is to shoot snapper in deep open water rather than in caves where they can get loose and smash up your gear. Attached to my 160 was a 30m standard Rob Allen floatline, attached to a single hard 11l torpedo buoy. The spear was 7.5mm tri cut with a double wrap of 400lb shooting mono to give an effective range of 7m.

Contact and capture of the world record Dog Snapper

I made for the dropoff against the current, a swim of 100m out to sea from where the boat was anchored. The current required steady progress but was not uncomfortable. I loaded my first rubber as I was nearing the dropoff no need for such a gun on the very shallow reef!). Just then I saw the edge of the dropoff and a very fat snapper moving along it. He clocked me at once, and was clearly a wary fish as he looked suspicious. However I was still a safe distance from him- me on the surface and him at 20m. I loaded the second rubber thinking this was going to require a bit of firepower if I was to get him in the open before he got in the caves that line the edge of the dropoff.

As if thinking the same thing the snapper, looking small and green at that depth, headed into one of the caves, but in a fairly leisurely way. Knowing there was a good chance he was going to come out again, I breathed up and made my dive, directly above the spot it had emerged from. When I was about 6m down, the fish did indeed come out, headed directly away from me, this cost him a few seconds (and metres of range) before he turned to his left and clocked me descending right behind him.

He immediately turned to face a honeycomb collection of cracks in the reef about 5m to my left which was clearly to be his preferred hiding place. The big fish accelerated, still below me and about 5m away, but I had anticipated his path and he passed my aiming point and I fired the big gun. It was clearly a hit but the fish did not slow down. I had to put all pressure on the line as I ascended, trying to keep him out of the cave. Despite my maximum efforts, he made it just inside but I could see the back of the spear so he was not in far. Sweating and gasping on the surface to keep the fish from going into the cave was hard work and 15 minutes later I was still nowhere near breathed up. The current seemed to be changing direction and my 11l float came by. Quickly I tied the floatline off short on the buoy with a couple of overhand knots. This kept the line vertical so the fish could not get in the cave, and allowed me to breathe up properly to take stock of the situation.

Moray eels were very active, coming out of the cave to see what the fuss was about. I was not pleased to see them! I made my dive, and levelled out just under the ledge where the spear could be seen. My watch read 23m. The cave went way back and down, but my efforts to stop the fish getting in the cave had actually resulted in it getting completely stuck between two broad walls of rock which bordered a trench. The trench led down into the honeycome and was just a narrow crack 10cm across at the top. Here he was stuck! Amazed at my luck (and thankful that the shot had held) I was able to grip the top of the spear, keeping the pressure on whilst I pulled the fish down and backwards out of the crack.

As it came free I got my hand in its gills and it came up to the surface without too much trouble, having worn itself out trying to escape into the cave. At the surface I finished it off with a quick jab to the top of the head and towed it the 100m back to the boat and passed it up on board.

Tony had caught another snapper, but smaller, so it was a great day for all of us. Colin also got some huge rainbow runners. The fish made excellent eating after the checks were completed.