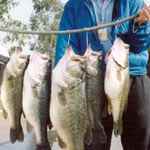 I was very disheartened when winter came along – I’d been diving though the summer with some success, but I had landed nothing big. Although there were still a few bass being caught in the early months of winter, I was not experienced enough to go into these deeper waters with strong tides. So, instead, I decided to prepare myself for the upcoming summer by attempting to go out diving through the winter months. At first this was just to try out new gear and try to improve my breath hold while looking for potential hunting grounds. At first, these dives started out to be very short and unsuccessful, but determination got the better of me, and I started going more and more. This in turn led to me seeing a couple of fish, although mostly flatfish, they were fish all the same.

Soon my dives became longer and sometimes I would stay out for hours, searching for different types of seabed often swimming stealthily through weed and rocks trying to find cover, preventing any fish that may be around from seeing me – I didn’t want them swimming off!

Catching an edible fish in winter:

When I shot my first flatfish I was overwhelmed that I had managed to catch an edible fish at this time of year. This gave me the inspiration to keep going out and try to prove a lot of people wrong, that you can catch decent fish all year around. I’ve spent many hours swimming around hunting flatfish in cold empty waters, with some dives having an air temperature of -5 degrees. This didn’t faze me as I managed to catch some dinner plate sized flatfish, sometimes coming back with three or four fish ranging between 1lb and just over 2lb!

Going for the silver fish:

I had also been out with a couple of friends who had seen silver fish (bass or mullet), this confused me as I assumed they moved out into deeper warmer water in the winter months? But it also excited me, and once again I was on the hunt. This time I employed different tactics in the hope of seeing (or even luring) a silver fish towards my spear. After missing a mullet of about 6lb, I believed there were silver fish around, and instead of trying marks I know produce flatfish, I tried different marks, where there may be bass or mullet hiding. This paid off on a recent trip, where we tried one location with no fish seen, undeterred me and a newbie friend went to the back up location to try and shoot the faithful flatfish, upon entering the water, there were a lot of bait fish that were surprisingly wary, shooting off as soon as we approached them. This made me wonder if there were any other predators around that were scarring the smelt. After swimming around over a sandy bottom for just over an hour I decided I would try the edge of a reef nearby, swimming along the edge I was surprised when a large black head came out from under the weeds below me, taken by surprise I fired a rush shot, and missed and the fish swam off. I quickly loaded my Rob Allen Caranx and swam in the direction the fish went. After about five minutes, I saw a silver flash between two rocks, and then a head emerged, hoping it hadn’t seen me I raised the gun, only to realise I was not going to make the shot due to the two rocks covering the body and only just being able to see the outline of the head. I inhaled slowly, and then sank into the cover of the weed, waiting for the fish to move. Shortly after the fish turned side on, and I realised this was my only opportunity, I shot and waited anxiously for the fish to swim off rapidly. Surprisingly I had shot the bass through the backbone and stunned it. I quickly grabbed the end of the spear and swam to the surface of the water, and to my delight the bass was secured on the spear. I dispatched the fish quickly and threaded It onto my stringer. Overcome with joy, I called over my friend and showed him the fish, my new personal best bass.

Next, we swam off through the reef and shortly after, I saw a long shadow slowly swimming through the weed. I slowly raised the gun and shot, again the fish lay motionless on the bottom. Quickly I swam down and grabbed the fish, before realising the spear had not penetrated the fish fully. I grabbed the fish buy the gills and swam to the surface, this is when the fish started kicking its big powerful tail and nearly escaped my grasp. Luckily I managed to reach my knife with one hand whilst gripping the fish with the other, I dispatched the fish and strung it onto my stinger, it was only when I let go I realised how big the fish was, it was easily my personal best, beating the bass I had just shot.

We continued our swim towards a landmark we decided would be the final dive of the session. Shortly after, whilst crawling through dense weed, I saw a bass swimming at us head on, feeling sorry for my friend I tapped him and pointed to the fish. Quickly he raised his gun and shot, narrowly missing the bass that swam right past my face, too close and too fast for me to shoot, it disappeared into the distance. By now we were within 50 yards of our final destination, my friend decided to swim away and have a look in the shallows whilst I stayed on the edge of the string weed. Then from nowhere a silver flash caught my eye, turning slowly I saw a bass emerging from the weed looking straight past me, instinctively I raised my gun and fired, but next all hell broke loose! There was weed and water splashing around everywhere, and silver flashes kept appearing and then disappearing. Retrieving the gun I had dropped I realised the fish had tired and started to sink, I quickly dived down and grasped the spear again, securing the bass all the way to the surface. I used my knife to dispatch the fish, and then realised the fish had tied the gun and float around my friends float line and around my snorkel. After a couple of minutes spent un-tying the knots, I managed to rest over my float. I was knackered! I looked at my friend, and even though he was clearly disappointed, I could see he was also very tired. We decided to call it a day and start the long swim back to the shore. Upon reaching the shore I was relieved to be on land again. Then it dawned on me how big each bass was. It was a short walk back to the car, we were very tired, but I was overwhelmed with excitement – I couldn’t wait to get the fish home and find out what my new personal best bass was. At home we weighed the bass, in order of smallest first and then leaving the big one until last. The weights of the fish were; 5.52lb, 6.57lb and the biggest weighed in at 8.68lb!

Beating my personal best THREE TIMES within half an hour!

I had previously set myself a target for the summer of catching a bass over 5lb, this was my aim for the year which I had hoped I would achieve in the summer. I was the happiest man alive, and couldn’t believe I had just had a session like that, especially in winter! This session allowed me to achieve my personal goal, and beat my personal best bass 3 times within half an hour. Now I cannot wait to venture out again.

A big thank you to Titus, Clive and the rest of the Crystal Vis team for providing the spear gun used, but most importantly the knowledge required to catch these magnificent fish.

Many thanks to you all.